You are here: Home » Animals on Exhibit – Not For Sale » East African Crowned Crane – NOT FOR SALE 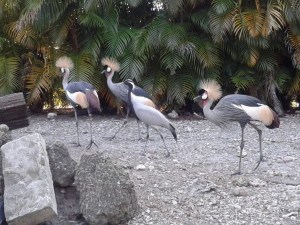 The East African Crowned Crane is a subspecies of the Grey Crowned Crane, found from eastern Democratic Republic of Congo through Uganda (of which it is the national bird) and from Kenya to South Africa. Its natural habitat is open landscapes- marshy areas, low moors, rifts, bogs, along the shores of lakes, ponds and grasslands near water. Its body plumage is mostly grey, typically with white wings, and its head has a crown of stiff golden feathers. Males tend to be slightly larger than females, with average sizes around 1 m (3.3 ft) tall and weight at 3.5 kg (7.7 lbs) While in flight, the crane’s wing span can reach six and a half or seven feet across. Young birds are greyer than adults. This crane makes a unique and melodious honking call that involves the inflation of the red sac under its throat- this is especially uttered in a chorus of communication during flight. They are known to perform spectacular dances comprised of head-bobbing, wing fluttering, leaps and bows, not only for mating displays but also as expressions of joy.

As omnivores, East African Crowned Cranes eat plants, grains, seeds, insects, worms, frogs, small fish, snakes, and the eggs of water animals. Two to five eggs are usually the product of mating, and it is suggested that pairs remain monogamous. They are fully mature by two or three years of age, and can live 20-40 years.