Ducks and Mallards – NOT FOR SALE

You are here: Home » Animals on Exhibit – Not For Sale » Ducks and Mallards – NOT FOR SALE

Ducks – NOT FOR SALE 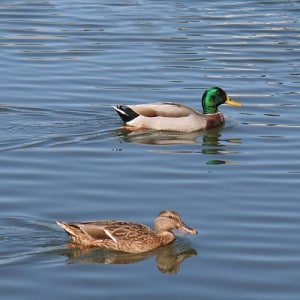 Ducks, perhaps the birds we are most familiar with, are all part of the aquatic bird family Anatidae, which also includes swans and geese. A duck’s body is normally elongated and broad, but in the case of diving ducks, the figure is more rounded. Diving ducks and sea ducks are heavy and find difficulty flying, but are able to forage deep underwater. On the other hand, dabbling ducks, such as mallards, feed on the surface of water or on land. Quacks are mostly heard from female dabbling ducks, although these birds make a wide range of sounds, from coos to whistles and grunts. Wings of ducks are strong and usually short and pointed- flight requires fast, continuous strokes. Only a few species of “steamer” duck are flightless, though many species of duck are temporarily flightless during periods of molting. (In the wild, this usually occurs in periods before migration) Ducks are opportunistic eaters, and will eat a variety of grass, aquatic plants, insects, seeds, worms, small amphibians, fruit, fish, crustaceans, and other items. They are usually monogamous during breeding season, but a bond may last up to a year or more.

The habitat and distribution of ducks is cosmopolitan, excluding most Antarctic territory. For more than 500 years ducks have been domesticated as pets and farm animals, all of which have descended from mallards or Muscovy ducks. Domestic ducks live an average of ten years, though the life expectancy of ducks depends on their sizes and breeds: larger ducks usually have shorter life spans.