Abdim’s Stork – NOT FOR SALE

You are here: Home » Animals on Exhibit – Not For Sale » Abdim’s Stork – NOT FOR SALE

Abdim’s Storks – NOT FOR SALE 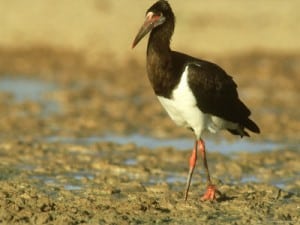 The Abdim’s Stork is also known as the white-bellied stork, due to its appearance. It is the smallest species in the stork family, though still a large bird: females are 2.5-3 feet long, weighing 2-3 pounds, with 2-3 feet wingspans while males are similar but slightly larger in weight. (Its broad wingspan allows it to soar easily.) Adults have glossy black feathers with a purple sheen, with white underparts, rump, and upper tail, a grey bill and legs, red knees and feet, and a blue face with red lores. Sexual maturity is reached at 4-5 years, and overall lifespans of these storks is about 20 years. They are normally silent, but may utter two-note whistles at nest.

The Abdim’s Stork’s natural habitat is grasslands, pastures, and cultivated fields in East Africa, from Ethiopia to South Africa. Its diet consists primarily of large insects, but may also include small reptiles, amphibians, mice, and fish. Abdim’s Storks are widespread and common throughout their home range. They are one of the most sociable storks, traveling in the wild in large flocks up to 10,000 birds. At the same time, they breed well in captivity since they are thought to bring good luck, local villages in these regions have protected them for years.