Marmoset Monkeys for Sale: Keep Them Busy with Enrichment Activities

Posted at September 18, 2014 » By : admin » Categories : Industry News » Comments Off on Marmoset Monkeys for Sale: Keep Them Busy with Enrichment Activities

Did you know that animals can learn from online video tutorials, just like humans do? Streaming sites like YouTube traditionally cater to people, but it won’t be long before the website or other platforms will have animals– like marmoset monkeys– as the target audience, especially after the findings of a recent study. 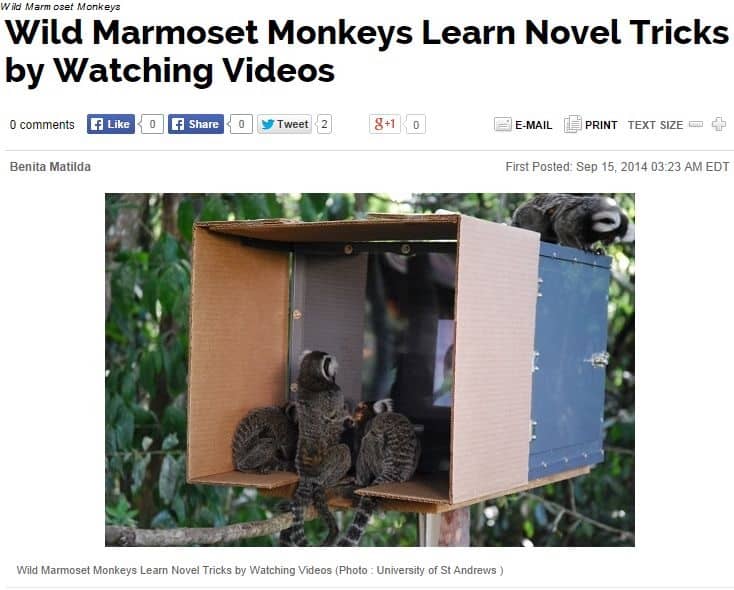 Researchers from the University of St. Andrews worked with the University of Vienna to see if wild marmoset monkeys can learn novel tricks from recorded videos of fellow primates. Previous studies had shown that captive animals can do so, but this is the first experiment on wild monkeys. Science World Report writer Benita Matilda has more on the story:

A laptop was placed in a protective case in the region of the jungle where wild monkeys live and play. The laptop was above a transparent box containing the treat. The 12 groups were shown the clips of monkeys successfully opening the drawers or lifting the lid off the box and the other group was shown still images.

The researchers noticed that 12 of the monkeys successfully opened the box and 11 of them had watched the technique in the video. Apart from this, the monkeys also imitated the various methods of opening the fruit they had viewed in the video.

If you are interested in pet monkeys for sale, you must be familiar with the training and other activities they need to thrive, including learning new tricks. As part of the captive animal’s enrichment, these stimulating activities promote the primate’s physical and psychological health.

The enrichment that common marmosets and other similar species need include activities for finding food (foraging), play, and socializing. Simulate their natural habitat through foraging items like grass, rocks, wood chips, and live insects, and use toddler toys or household items to hide treats. House them with fellow marmosets to encourage natural social behavior and ensure their overall well-being.

Remember that marmoset monkeys are highly intelligent creatures that need assorted stimuli to avoid boredom and stress. Along with providing you a marmoset monkey for sale, reputable breeders of exotic pets and animals like Poggi’s Animal House can also help you with the specialized care that the primate needs for a healthy, thriving life.