Posted at July 4, 2014 » By : admin » Categories : Industry News » Comments Off on Calorie Cutback: Will 30% Less Mean Good Health for Monkeys for Sale?

Cutting calorie intake for humans may be subject to debate. For monkeys, however, it’s all but confirmed in a study that has been running for 25 years shows.

In 1989, the Wisconsin National Primate Research Center in Madison gathered a total of 76 rhesus macaques and divided them into two groups. They let one group of 38 eat whatever they want, but lowered the calorie intake of the other group by 30 percent. This opened up new views on the issue of lowering calorie intake among animals but not so much for humans.

“We set out to test the hypothesis: would calorie restriction delay ageing? And I think we’ve shown that it does,” says Rozalyn Anderson, a biochemist at the University of Wisconsin who led the study, which is published today in Nature Communications.

By the time the results of the study were published, however, a study by the National Institute of Aging in 2012 published contradictory findings. Nature’s Erika Hayden reports:

“In 2012, a study at the US National Institute on Aging (NIA) in Bethesda, Maryland, cast doubt on the idea, reporting that monkeys on low-calorie diets did not live longer than those that ate more food.

“Are we seeing health benefits? Yes, but I don’t know that we’re necessarily seeing survival benefits,” says Julie Mattison, a physiologist at the NIA.”

The primate diet varies heavily due to living in various habitats. Some monkeys eat nuts and grain, while others prefer fruits and berries. Contrary to popular belief, not all monkeys prefer bananas. In fact, a zoo in the U.K. has already banned monkeys from feeding on bananas due to their calorie and sugar content. 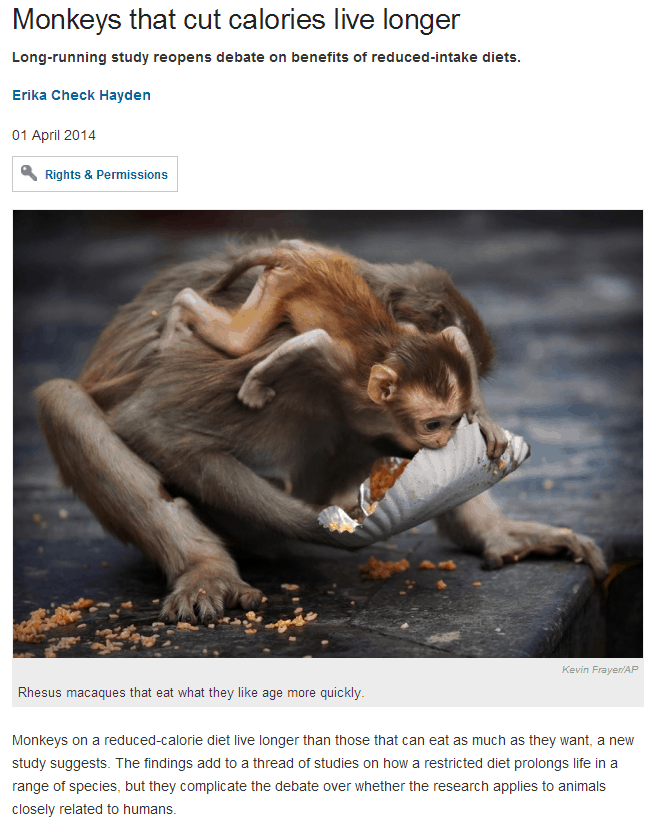 Interestingly, the primate diet is relative to the primate’s size, according to a British study. Small monkeys feed on insects, medium-sized ones on fruits, and large ones on foliage. Following the dietary track of marmosets, the findings seem to coincide with the study. After 14 weeks, they can feed on solid food like cereal, fruits, and vegetables.

However, finger monkeys for sale must start with formulas first. One infant formula is composed of either primate or human formula, polycose powder, vegetable oil, and plain yogurt. While the story is about cutting calorie intake, getting enough calories is essential for baby monkeys since their bodies are undergoing significant, calorie-burning change.

The monkey’s need for milk will decrease over time, so it’s important not to sustain an all-milk diet for too long. Ask experts like Poggi’s Animal House, which has some useful tips on feeding, for the best way to craft a diet for baby monkeys.